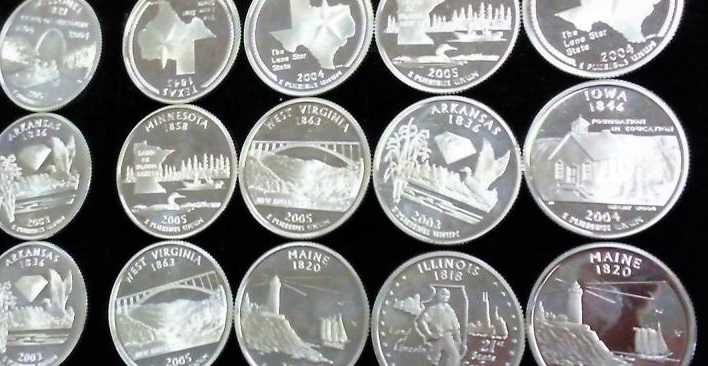 This Coin Has Gluten!

You’ve probably had at least one of every state quarter in your pocket or purse at one time or another. And now you could be wearing the coin on your finger, or say, on a chain around your neck (Hint, hint Mrs.MagpiesTreasures on Kickstarter). But here are some things you may not know about the state quarters rolling around in your piggy bank.

Heads, I win; heads, you lose!

Want to win your next coin toss? If you want to win the bet, pick “heads”. George Washington’s visage appears on the front and back of two state quarters. He can be seen on Mt. Rushmore on the back of South Dakota’s 2006 quarter and crossing the Delaware River on the back of New Jersey’s 1999 state quarter. Heads, I win; heads, you lose!

We could be royal…

There is only one state quarter to depict royalty on it. The 2008 Hawaiian state quarter has King Kamehameha I on the back along with the motto “Ua Mau Ke Ea O Ka Aina I Ka Pono” (“The Life of the Land is Perpetuated in Righteousness”). Technically, there is a King Salmon on the back of Washington’s state quarter from 2007 but I choose to ignore fish royalty.

On the back of New Hampshire’s 2000 state quarter is the “Old Man of the Mountain”. The Old Man was comprised of a series of natural cliffs that when viewed at a certain angle, looked like the profile of an old man. This natural formation has been noted in many books, passages, and poems, and popular culture references dating back centuries. But, alas, in 2003, the formation succumbed to natural forces that it could not fight any longer. There was much mourning of the loss of the Old Man, but he is at least immortalized on the back of New Hampshire’s quarter

The mint has plans for many more quarters over the next several years in its “America the Beautiful” program, featuring national parks. This ensures that there will be many more things of interest to be seen on the back of your pocket change in the future, so keep looking.

← Is this REAL silver?
Global Sizing Made Easy →